The Theology of time is a compilation of twenty lectures given by Elijah Muhammad, Messenger of Allah, between the periods of June 4, 1972 and October 29, 1972.
The setting was the dedication of Temple #2, Chicago, IL, wherein the Messenger was the keynote speaker for the next twenty lectures. This was very significant in light of the Messenger being forbidden up to that time to speak. He stated that Allah had forbade him to come out until it was time.
Excerpts from the lecture series were put into the Muhammad Speaks Newspaper; however, the entire transcript was not published until the early 90’s by the former secretary of the Nation of Islam.
This early edition was published in the form of a subject indexed format, which made for easy reading; however on drawback was that where there was no significant quantity of subject matter, certain aspects were omitted. These omissions were in part the reason why the whole transcript in its entirety was published by Secretarius MEMPS.
First published in 1997, Minister Nasir Hakim compiled each lecture as there were taught by the Messenger and this method was considered best; for the Messenger himself stated, “Since the time is helping me make manifest so much of what I am teaching, I want to...give it to you...but can’t do that until I get you on the first step. I got to go step by step to the first step to get you to see, but once you see you will be like the donkey Balaam was riding. Remember, the donkey had never had [a conversation] with an angel. He was confounded to see an angel standing before him; teaching him the knowledge of what he was carrying on his back.
“Allah is making manifest the truth all out in the streets, all around you and above you, so we don’t have to go after it like we did 40 years ago....What I’ve been saying is only to shape you for listening to the real thing that I want to give you. I have just now got up to the steps of what I intend to teach you...and seeing that you do not know these steps that I am taking, I build them all up one by one to you, then when I get you up to the floor, you can take a seat and sit down.”
This mean and method used by the Messenger not only confirms the importance completeness, but how the teaching was delivered as well. The exceptions of omissions and easy reading created by the former secretary’s attempt, was at the expense of the rule. This can be similarly characterized when reflecting on the rules of mathematics. Although one knows how to add, subtract, multiply, use square roots and substitutions without adhering to the rules of math, the wrong answer is highly likely. Whereas, if one were addressing an equation which deals with all the above, then if square roots aren’t solved first, the answer will be wrong, because that is the rule of math. Likewise, if the method in which the Messenger gave the message is omitted, then possibly where one ends up may not be where the object of the teaching is intended. This is the major reason a full compilation as the Messenger taught it is produced.
This lecture series represent one of the most comprehensive overviews of the Messenger’s work ever compiled into one body of knowledge. Based on such profundity, Minister Nasir Hakim included many footnotes citing all biblical and qur’anic scriptures as possible. This compliment of scholarship gave even more weight to how important it is for this book to be made part of one’s library. 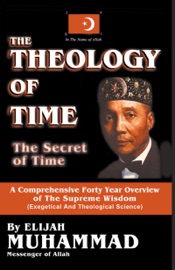 NATIONAL BESTSELLERONE OF THE BEST BOOKS OF THE YEAR:VOGUE  FORBES  BOOKPAGE  NEW YORK POST  WIREDI have not been as profoundly moved by a book in years. Jodi PicoultEven after she left home for Hollywood, Emmy-nominated TV writer Bess Kalb saved every voicemail her grandmot The Theology of Time: Direct Transcription epub / PDF Books

An Apple Books Classic edition.Alone-it is wonderful how little a man can do alone! To rob a little, to hurt a little, and there is the end. What would you do if you were became invisible? Would you use that power for good, or would you become consumed with the freedom it afforded you? Griffin, the The Theology of Time: Direct Transcription pdf books

How to Get More Motivated, Set Bigger Goals, and Achieve More by Thinking BiggerHave you ever wondered what separates people who think bigger from people who set their bar low? What makes one person accept low standards and another person to constantly raise them?Why does one person strive to build The Theology of Time: Direct Transcription epub books

From the New York Times bestselling author of Something in the Water and Mr. Nobody comes an unputdownable mystery about the nightmares that abound in the pursuit of Hollywood dreams (Caroline Kepnes, author of the You series).   ONE OF THE BEST THRILLERS The Theology of Time: Direct Transcription epub books

I cant breathe without him.Playboy. Billionaire. Criminal.I should hate him for what hes done to me, but Im powerless to resist him.His touch engulfs me.His demands conquer me.But Flynn Campbell isnt who I thought he was.Suddenly, Im thrust into a world of seduction and sin.Ensnared by danger and po The Theology of Time: Direct Transcription pdf books

Traumatized by her past, Sera spent the last three years at college hiding from the world. Shes content to stay locked away until a chance encounter with Liam changes her life. Though shes frightened by the powerful emotions he awakens in her, Sera finds herself opening up to him more every day.Harb The Theology of Time: Direct Transcription pdf books

On a cold February morning in 1967, Sheriff Coleman Grundy finds Betty Lou Mundy dead in her front yard and her husband on the porch with the gun that killed her. It looks like a classic case of revenge on a cheating wife.Until the next murder. And the next. As Cole desperately searches fo The Theology of Time: Direct Transcription pdf books

Criminal profiler in training (and newlywed) Jessie Hunt, 29, discovers that dark secrets lurk in her new suburban town; when a body turns up dead, she finds herself caught in the crosshairs of her newfound friends, her husbands secrets, her serial killer caseloadand the secrets of her own dark past The Theology of Time: Direct Transcription epub books