Royal Obsession: Radical separatists, created at the onset of the Great Conflict, have been made obsolete by years of peace. They live in their subterranean Shadow Maze and only emerge when it's time to breed. For Varrik, that time is now.

Varrik, current leader of the Shadow Assassins, knows his people are on the verge of extinction. If they cannot adapt, they will die. Yet if his son were a direct descendant of the High Queen it would secure a place for future generations. Protecting his people is his first priority, so Varrik assembles a hunting party and kidnaps the royal twins. He is determined to claim the eldest for his own.

Echo, the younger princess, knows her pampered sister will never survive the sexual appetites of their virile captor. Echo doesn't understand the powerful attraction she feels for Varrik, but drawing his attention is a far better choice than allowing him to overwhelm her twin. She doesn't expect to find him fascinating or to crave the demanding passion he ignites. Can a dominating warrior and his willing captive bring light to the Shadow Maze?

Mystic Militia: When Tori's sister is targeted by a Shadow Assassin, Tori finds herself trapped between two powerful, alien forces. The Shadow Assassins will stop at nothing to capture and possess their mates, yet the Mystic Militia are just as determined to prevent any more females from being victimized.

Lor, leader of the Mystic Militia, knows firsthand the emotional devastation left behind by Shadow Assassins. Shortly after his arrival on Earth, he encounters Tori and sparks fly—literally. She's intriguing, attractive, and in more danger than she can ever imagine.

From the moment their gazes lock, Tori knows there is something different about Lor. It's not just his handsome face and muscular body. He triggers a latent ability and suddenly she's "seeing" all sorts of things that can't possibly be real. All she wants is to find her missing sister and get on with her ordinary life. But once her eyes are open, there is no turning back.

Alpha Hunter: Angie is stranded in a strange town without a car, money or even her cell phone. Luckily, her sister sends Blayne to the rescue. Angie is expecting a ride and maybe a shoulder to cry on—and then she meets her rescuer. After seeing his gorgeous face and muscular body, Angie can't decide what sort of ride she wants him to give her. Before she can make up her mind, all hell breaks loose. Suddenly Blayne is battling another man with flashes of light and both men are teleporting, as if space alone can't contain them.

When a dangerous enemy plants a tracker on Angie, the only choice Blayne has is to take her off-world. If they return to the Mystic Militia, it will reveal the location of their ship to the enemy. She's been targeted by the Shadow Assassins because of her latent abilities. He must release her gifts and teach her how to control them before they return to Earth. The only problem is, he can't seem to think of her as an apprentice. Their attraction is mutual, instantaneous and intense. He has vowed to keep her safe, yet his good intentions evaporate the moment his lips meet hers. 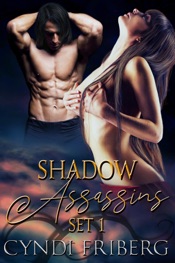