This book argues that Brexit will wholly re-shape the legal framework and public policy norms relating to linguistic diversity that have dominated public life in the UK and the EU since the Treaty on European Union in 1993. First, Brexit de-anchors the linguistic actors engaged with sub-state nationalisms in the UK (in Northern Ireland, Wales and Scotland) from the ethno-linguistic imaginary of the so-called ‘Europe of the regions’. This strengthens the case both for the de jure recognition of English as the official language of the UK and for embedding autochthonous minority language rights and freedoms in a transformed UK constitution. Second, Brexit strengthens the normative case for English as the lingua franca of the EU, by reducing the injustices associated with the rise of English as the EU and global lingua franca. The book will appeal to students and scholars across the fields of political science, political theory, law, language policy and planning, and sociolinguistics. 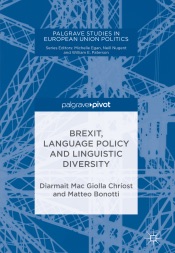